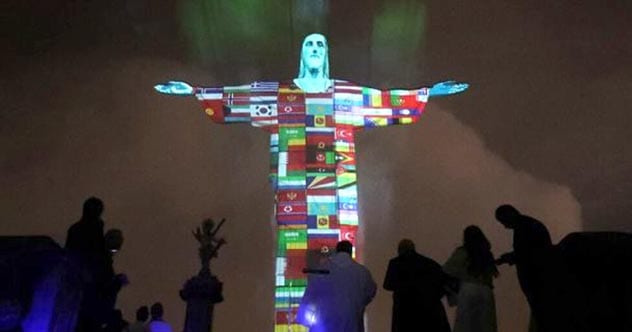 
Efforts to slow the impact of the coronavirus have been compared to rations and restrictions WWII-style and people are getting more anxious every day. This is evident in the panic-buying incidents taking place world-wide and in the fear you see in people’s eyes when you pass too close to them in a shopping center. However, there is much to be said for the positive side of this pandemic (pardon the pun). People are uniting worldwide to fight ‘a common enemy’ and even political parties are setting aside their differences and putting the needs of the people first.

Heroes are popping up everywhere and heartwarming tales are beginning to saturate the internet as much as the tales of panic and mayhem have. On this list are just 10 examples of uplifting things that have the potential to keep people somewhat sane in these crazy times.

While Italy is engaged in a fierce battle with the coronavirus, natural order has returned to Venice in the form of swans and dolphins swimming freely in the now-clear water of the canals.

With the canals usually bustling with boats, the water is always cloudy. But soon after Venice implemented lockdown measures, the water started clearing as sediment remains at the bottom of the canals. And while the mayor’s spokesperson has said the clearer water doesn’t necessarily mean higher quality water, it remains a sight for sore and fearful eyes during this uncertain time.[1]

Around the world institutions are closing in an effort to slow the spread of the novel coronavirus. These include zoos, libraries, museums, aquariums etc. Shedd Aquarium in Chicago is also closed to the public, but the staff are determined to keep the animals entertained. This led to a spontaneous penguin ‘field trip’ through the museum.

The penguins met some of the other animals in the aquarium. Wellington the penguin couldn’t get enough of the fish while Monte headed to the dolphins. The aquarium is planning on keeping people updated on animal adventures via social media for as long as the building remains closed.[2]

As Italy officially reached the highest death toll from coronavirus, those under lockdown refused to have their spirits broken. In scenes reminiscent of a war-time musical, Italians have come together to inspire and uplift one another by singing aloud and playing musical instruments from their balconies.

A video montage of Italians all over Italia from north to south to central to the islands — all signing together during the Italy Lockdown is a kind of triumph of spirit, a love in the time of coronavirus pic.twitter.com/XqoLsGMoIV

The idea spilled over to Spain where people have also taken to singing and clapping together while self-isolating or quarantined in their homes. There was also a call on social media platforms for everyone to stand on their balconies and at their open windows and give a standing ovation to overworked medical personnel. The call was heeded with gusto and the sound of cheering could be heard for miles.[3]

In South Africa the news that the Covid-19 pandemic had reached the country’s shores sent hundreds of people into a state of panic. Bulk buying and chaos ensued. Multiple statements and pleas from the SA government seems to have calmed the situation slightly, but the tension still can be felt in the air.

Pick n Pay, a South African supermarket chain, decided to intervene and try to calm the panic. They have introduced a system whereby they open 1 hour earlier each Wednesday for pensioners and people over 65 to do their shopping in peace and limit the time they spend in crowded spaces. As older people are more susceptible to complications of the coronavirus, this plan has been lauded as forward thinking in a time of extreme stress.[4]

People around the world are wondering how they are going to pass the time while in quarantine or self-isolation. Chris Martin live-streamed a mini concert from his home on 16 March which was extremely well received by fans and many other stars have since joined in the effort to keep people entertained while they get used to this strange new reality.

5 Pollution lifts as quarantines are implemented

In just one month the cloud of toxic pollution hanging over major Chinese cities has nearly dissipated in the wake of quarantines and self-isolation. NASA air quality researcher, Fei Liu, has said that this was the first time he had seen such a dramatic reduction of polluted air over such a large area due to one specific event.

CO2 emissions were down by at least 25% between 3 February and 1 March as China’s coal usage is plummeting. While it is likely that the pollution levels will increase again once the pandemic is contained, it is great to see blue skies again where the smog was potent enough to kill. [6]

When social distancing was introduced in March 2020 as one of the efforts to contain the coronavirus, people started looking for ways to entertain themselves but also others and keep them from becoming despondent. Sports broadcaster, Lane Grindle, suggested on Twitter that people could put up their Christmas lights again in order to create a safe activity for families; the favorite pass time of driving around to look at the beautiful lights.

This idea quickly caught on and many people joined in, turning their Christmas lights back on, and spreading cheer around their neighborhoods. The Hallmark Channel also jumped on the festive bandwagon and announced they would air a holiday movie marathon titled We Need A Little Christmas between 20 and 22 March 2020.[7]

Becky Wass from Cornwall thought up a fantastic idea to help others who need assistance during their self-isolation period. She came up with a postcard template that could be shared on social media. The postcard simply says “Hello! If you are self-isolating, I can help”, with space below for people to fill out their contact numbers and requests.

Other people are putting huge banners outside their houses that say they support their neighbors and are willing to help with tasks they need assistance with.[8]

2 Jennifer Haller takes one for the world

On 18 March Jennifer Haller, one of 45 volunteers, became the first person in the world to be injected with a potential vaccine against the coronavirus. She says of the experience that she felt happy and excited to be able to do something to help, considering how helpless people are feeling at the moment.

Volunteers are each given 2 injections 28 days apart to test the safety of the vaccine. The race is well and truly on to find a vaccine that works, and 35 institutions are involved in testing and trialing potential vaccines.[9]

1 Christ the Redeemer statue lights up in solidarity

On Wednesday, 18 March, the Christ the Redeemer statue in Brazil was lit up in solidarity with countries fighting the coronavirus pandemic. Affected countries’ flags flitted over the massive structure and messages of hope were displayed. Below the statue, the Holy Sacrifice Of The Mass was held to pray for everyone infected by the virus while #praytogether was projected on it in different languages.[10]

As we can see in this heartwarming video taken in the last twenty-four hours, Spanish soldiers are helping out the old and infirm where needed. As the virus progresses and nations find themselves calling upon the military to provide assistance, we are all more likely than usual to have dealings with the police, medical officers, soldiers, and the like. This is a good time to remind us all that these men and women have been putting their own lives on the line for our sake for many years, and they are stepping up right now against an invisible enemy to do the same in a more visible and direct manner. Give them a big thank you and a smile if you do have to interact with them. They are as worried about loved ones as we all are and a little kindness will go a long way to make their difficult task a little easier.

[From JFrater: For my part I would like to thank all of the readers here who are, or have been, involved in the military, health, religious, or emergency services. Your sacrifices do not go unnoticed. I think I can say, on behalf of everyone here: while we may not be able to be with you in person, we are all with you in spirit.]

Estelle is a regular writer for Listverse.